“There are a million examples of animals speaking to us,” Marc Bekoff said to me in an interview for this blog.  “If people open their hearts and minds to animals then they’ll see them e 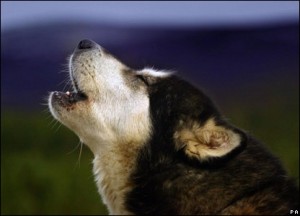 very day.”  For those who share their lives with dogs, breathe, eat, and love with dogs, understanding the dogs they live with is a given.  What is less understood is the possibility that those barks and whines are communicated with you specifically in mind.

A story on wired science most recently shared a study by Csaba Molnar published in Animal Cognition.  Using an algorithm to classify  Hungarian Sheepdog barks, Molnar concluded that humans possibly provided selection pressures necessary to identify context-specific calls, such as alarm calls.  This is because Molnar found less variation between alarm calls than other calls.  Unfortunately, he was unable to confirm the evolutionary aspects of his hypothesis.  With a sample of 6,646 barks from nine dogs, over 50-percent of which came from four, not much you can conclude for the entire species of dogs.  Despite that, the work continues a methodology of analyzing animal communication that shows promise: producing spectrograms of vocalizations and running them through an algorithm originally used for classifying genes (See Melendez et al. 2006).  Too bad Molnar didn’t receive enough funding to continue this work.  I wonder how often groundbreaking scientific work into animal-human relations doesn’t happen because the student can’t receive funding.

It would be nice to see researchers in the near future secure funding to look beyond how human “designed” dog and more into how dog made human.  Let it be a quest for mutual discovery.  Perhaps that is a flaw of embedded anthropocentrism in ethology and behavioral ecology that needs to be recognized and dissolved.  What about human adaptations to understand dogs?  In classical Darwinian speak, wouldn’t that suggest dog selection pressures on humans as well.

Fortunately, we don’t have to depend solely on science to tell us what we already know and experience for ourselves.  I’ve been convinced for four years that Shelly, my adopted cat and dearest friend I’ve written about in earlier posts, meows specially for me.  And for my partner.  And for whoever else provides her with regular meals.  What I’m saying is that when Shelly meows, I know exactly what she’s saying and I know that she’s talking to me.  And she’s not always saying the same thing.  Her talking to me is no different than listening to a human adult speak a foreign language or a baby speak gibberish.  I know what she says because I can feel it, every pitch, every cry, every demand.  It’s because of that I can respond appropriately in a tone to match her own, and she understands me equally.  We may not both be speaking English, but we’re speaking the same language.