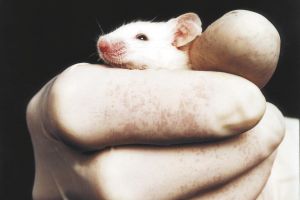 My interest is not with the content of the articles themselves but rather the lack thereof. Like all articles I read about animal research and vivisection, whether in vehement opposition or in feverish support, the authors of the three articles above neglected major areas of animal research in higher education. Medical research gets too much of the credit for violent, invasive torture and exploitation of animals. What about the rest of the laboratory research that happens just for the sake of it? By the sake of it, I mean the sake of the investigator’s insatiable curiosity, the sake of the student’s need to publish something (considered sound and credible, of course) in order to advance his career in science, the sake of science to produce some kind of knowledge. None of this research needs to have a pending need to justify its usefulness to human welfare. This research can happen more or less without lay-people knowing about it, much of it at taxpayers’ expense.

Now you’re probably thinking this sounds like a conspiracy theory, some gross inaccuracies from a quack animal rights person who knows nothing about scientific research and seeks only to discredit scientific research. I wish I were wrong about this subject matter. I wish the political economy surrounding scientific research did not exist. I wish that so many animal species, so many animal individuals did not disappear, unaccounted for, in the cracks of biology and psychology and animal science professors’ laboratories. Maybe then I could continue my path as a scientist like I dreamed and be able to sleep at night.

When animal rights advocates speak out against animal research and vivisection, we limit the concern primarily to medical research. And the animals sacrificed are almost exclusively mammals. The horrifying pictures of sickly rhesus macaques behind bars and the frantic white transgenic mice with ears on their backs (leaked to the public courtesy of animal rights folks) consume our imagination, and our focus becomes mammal.

At the University of Vermont, laboratory research with medical implications was not just limited to mammals, though the majority were severely inbred and transgenic mice. One professor, who I knew well, performed his experiments on fruit flies. Last time he detailed the experimental methods to me, which was over four years ago, he described the transgenic fruit flies as having their wings flapped and worked until they couldn’t move any longer, after which they were disposed of. The purpose of this experiment was to follow the behavior of specific proteins in muscle tissue, of course with the implications for understanding muscle dystrophy in humans. We never see lab experiments on fruit flies in the media. But they’re everywhere in the classrooms.

Nor do we see examples of the countless number of experiments on animals, vertebrate and invertebrate, addressing questions with concerns that never leave an academic journal and forming dissertations that collect dust on dean’s office bookshelves. The formica ants, the sows, the trout, the guppies, the wolf spiders, the sea horses and sea monkeys, the holstein cows, the jersey cows, the canaries, the zebra finches, the anura frogs, the honeybees–too many animals I’ve seen, too many tragic stories I’ve heard. And their stories don’t get media attention. Their lives, pains, and deaths go unseen, unheard, where they are replenished with more just like them.

So are there really suitable alternatives to animal research that will appease all stakeholders? Not for this kind of research. Non-medical laboratory research, with questions that demand the confinement, bodily manipulation, and often death of the animal subjects, has no alternative….